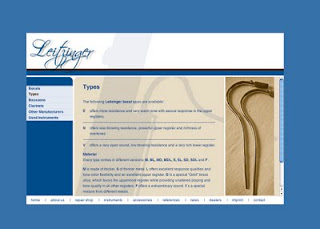 I am very pleased to have found Leitzinger crooks. Stephan Leitzinger makes the most stable yet flexible bassoon “bocals” I have ever tried. These have been popular in Europe and the US and Canada for some time but few have heard of them in the UK.
Stephan makes a vast range of styles so that you can match the crook to your bassoon and reeds and performance requirements. The main feature most people notice immediately is that with the right crook the bottom is not too sharp, the tenor not too flat and the high B and C not too sharp, with the octaves more balanced and in tune on a variety of reeds. Though the first blowing of them is not always impressive in the way that an old Heckel crook can be, once in the orchestra it is the ability to creep around pianissimo and create a real fortissimo that makes these such a hit with pro players around the world.
I was pleased to see and hear Meyrick Alexander using his platinum plated MDV2 for his final concert with the Philharmonia Orchestra at the BBC Proms 2010 which sounded splendid in the Ravel Left Hand Piano concerto solo!
I currently have an S2V platinum (thin walled, great for creeping around fag2 and very responsive) an MDV1 (Ravel piano concerto, Saint Saens top E’s no problem but still lovely down the bottom so not a one trick high note crook) and the best crook I have ever tried, M1F Platinum, which seems to have been made from metal mined by dwarfs and hammered into shape with the assistance of elves and is perhaps made of “Mithril”....it is some blend of metals that Stephan Leitzinger doesn’t tell us about in detail.
More information on “Leitzinger Bocals” can be found here (as well as information on his bassoons) www.leitzinger.de/en/ins_nav_02a.html
On my Mollenhauer contra I play a very early pre war Heckel contra crook which has projection qualities I haven’t found in modern ones and have a Puchner B2 which is fabulous for sorting out the flat tenor register on these contras. I am looking forward to Stephan Leitzinger’s plans to make a contra bassoon crook coming to fruition.
Julian Partridge from the Ulster Orchestra is now also playing on a Leitzinger so we have a matched section when I play there:
“I’ve been playing Fox bassoons for over 20 years and have always used Heckel crooks with them; finding the factory Fox crooks lacking flexibility, especially for grovelling around when playing 2nd bassoon. When I was working in Hong Kong I bought a Heckel C1 which was wonderful at grovelling. But I always thought it was weak in the tenor register. Fast forward ten years and Tom showed me a Leitzinger crook, which at first I didn’t warm to, but then a few months ago he leant me an M1N and I thought “wow”. It has more resistance than my Heckel but is great in the tenor register and is supremely flexible in all registers. There are rumours of a contra crook.. can’t wait.” Julian Partridge Acting Principal Bassoon Ulster Orchestra (Now the proud owner of the M1N)
Stephan has contacted me with the idea of coming over for a small event in UK in the Autumn which would be a great chance for more of us to try these crooks.
Posted by Unknown at 6:55 AM 1 comment: