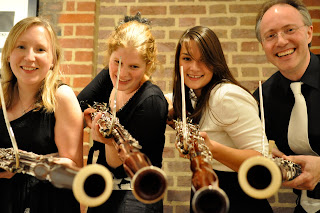 I have really enjoyed the coaching I have done with adults in the last few months - both sectional rehearsals for orchestras and one on one teaching. It's a very different experience to taking rehearsals with fourteen year olds! Both are fun, but the adult amateur world gathers together some very bright people who really want to make the best music they can.
On the subject of teaching bassoon players and teaching reed making one on one I asked one recent pupil - a very advanced amateur who has an encyclopaedic knowledge of chamber music repertoire - to write a few words on how he got on:

"In a matter of minutes Tom Hardy had singled out the right crook for my setup from among many. He then specified the right scrape for this crook and this reed, and proved it with a few deft scrapes to my number two reed, which then instantly became my number one reed! Invaluable session!"

"I had reached a very low limit of staccatto speed. Tom Hardy took one look at what I was doing and not only showed me what was slowing it down, but followed that up with a written set of exercises for me in particular to keep me from falling back into bad habits. Extremely useful. I will go back regularly from now on." Hugh Rosenbaum.

Couldn't have put it better myself, so I won't! Thanks Hugh!

Posted by Unknown at 7:40 AM No comments:

position of first and second wires on bassoon reeds

Well, in a random experiment after a discussion with another player and my slightly altered version of what she had been recommended by another pro bassoon player I discovered something rather odd about the first and second wires on a reed:
Moving the second wire up towards the first sharpens the overall pitch of the reed. It does on my shapes anyway (Fox 1 or Herzberg).
I have seen such a variety of wire positions and lengths of reed that I have long since departed from any set position as gospel. But slipping the first wire back towards the second also changes things and makes a slightly less resistant reed which is easier at the bottom but then not so supported at the top.
There are many other factors of course (variables) like the tightness of these wires and the scrape of the actual blade.
I was finding I needed to make a reed 25mm from shoulder to tip to be up to pitch on a Number 2 crook and couldn't work out how an ultra long reed like a Danzi would play at pitch. One of the factors is the wire position.
This is not the end of the search but just a bit of info that I couldn't find on any sites after a bit of googling so decided it warranted a blog post.
Posted by Unknown at 7:39 AM No comments:

Well, it must be Spring at last as there are bassoon solo concerts springing up all over the place this season!
Meyrick Alexander is playing the Weber Andante and Hungarian Rondo next week at St John's Smiths Square
You can read more about Meyrick here
Then there is the Royal Academy Bassoon Ensemble doing their thing on 24th April listing here
And the day after if you can get to Oxford for 25th April Karen Geoghegan is playing the Weber concerto with the Oxford Sinfonia
conducted by Mark Fitzgerald - a busy weekend for Karen!
Then next month on 25th May Adam Mackenzie is playing the Mozart Concerto at St Martin-in-the-Fields with the Brandenburg Sinfonia conducted by Bob Porter. Info here
There is a nice biog for Adam here
(The picture at the top is of Meyrick though just to confuse you).
Bob Porter is also conducting a Baroque concert featuring a Vivaldi bassoon concerto with Charlotte Cox playing the A minor concerto on 12th May.
Whilst linking and promoting these I was contacted by Bachtrack.com and I was sent another really useful link to find concerts - here
Click on "all bassoons" at the bottom of the first list to see what everyone is up to.
Posted by Unknown at 3:28 AM No comments:

This weekend will see over eighty young bassoonists descending on the Guildhall School of Music for the Big Bassoon Day.  Bob Porter has made an arrangement of "When the Saints" for a mass play in at the end of the day and top pro players are giving master classes so this is set to be quite something.  I have been drafted in to help on the "try a contra bassoon" sessions as well as the reed making/adjusting for some of the younger attendees!
The Big Bassoon Day
Posted by Unknown at 5:18 AM No comments:

Last year I had a scary moment when my bassoon fell over and mangled my early 1900's heckel CC2 crook (bocal). Luckily my first teacher and bassoon expert extraordinaire (David Lock out in deepest Suffolk) has some magic "dent balls" that restored it to its original shape and it plays just as well if not better now. This experience led me to look for another crook as a back up. I had heard about Benson Bell bassoons and my professor from the Guildhall School of Music (Ian Cuthill) mentioned in an email that Bell made the best pre war heckel crook copies he had tried.  I emailed last summer to find out more and Mr. Bell is a busy man (understandably with the testimonials you can see on his site! www.bellbassoons.com
To my surprise two crooks came through at the beginning of January. Confusingly the description on his site doesn't match the letters on the crook and his assistant tells me they need to update the site! The good news is that the pre war D crooks are very very close to a pre war heckel CC2 and the pre war C crooks are thicker walled and slightly more resistant (and thus more stable). The D type suits my pre war instrument. It is very even over the whole range of the bassoon right up to top E and although it lacks some of the character of the heckel the increase in reliability and dynamic range has me seriously looking at using it all the time. And increases my curiosity to try a Bell bassoon!
Posted by Unknown at 8:15 AM 1 comment: