Sometimes a small adjustment to a crook (bocal) makes a big difference to the playing angle and playing comfort for a bassoonist and can prevent long term strain of both neck and hands. After all the bassoon doesn't naturally fit the human body by any stretch of the imagination! I have always had to do little bending of a bassoon crook for my height and playing position so that my head and hands are at a comfortable angle. I haven’t needed the full “English Bend” that some makers provide (and which Heckel used to call "berger" bend and now seem to call "flat bend") which seems to work especially well for very tall people as it drops the hands/shoulders to a comfortable height when using a seat strap, spike or dutch leg support.

If there is more than a few centimetres bending needed I have usually had a repairer do this by filling the crook with a metal that melts at boiling point (such as Field’s Metal or Woods Metal) to make sure the walls don’t split or collapse. This involves re-corking and the right materials to hand, so I have done many bends just by filling the crook with table salt to give some support internally. For a small change on a new crook this has worked. Also I have risked bending the metal with nothing inside with no bad results and indeed watched one maker bend a new crook for me in front of my eyes (though he did tell me not to watch!).

However I recently did a small bit of bending on a crook which resulted in not only a split but a split right across and I suddenly found myself with two bits. Aaargh. My "crook bending without a safety belt on" days are over. 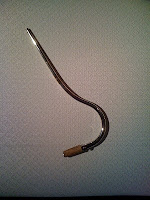 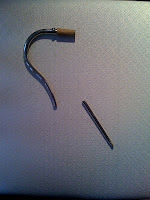 David Lock is a name known to most UK bassoonists. He has not only produced endless supplies of reeds and contra bassoon reeds for decades, he has also saved the day on repairs for many years. Although he is reluctant to take on metal work these days he has a very talented son Steve who lives a few minutes away from him (in deepest Suffolk) and repairs oboes, clarinets and of course bassoons! This week Steve saved the day by repairing the mess I had made below. Not only repaired, but actually works better than before! (Though I wouldn’t recommend it as a regular method of softening up a crook). Steve tells me he is totally happy to take on more bassoon repairs and I would highly recommend him: steve@utopians.co.uk

Though of course I am hoping not to repeat my mistake on unsupported crook bending again!

Posted by Unknown at 8:15 AM No comments: